Thirsty City presents the work of Krishna Reddy, a part of Collection 8 that brings together the path-breaking practice of Krishna Reddy, the nonagenarian sculptor and pioneering printmaker showing a range of work that encompasses his career spanning over seven decades. 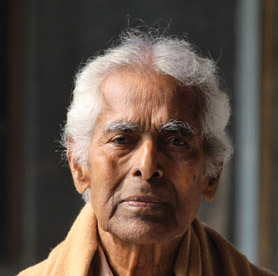 Krishna Reddy, (1925-2018, India) was initially trained in Rabindranath Tagore’s Shantiniketan and moved to London in 1949 studying sculpture at Slade in Henry Moore’s class. Thereafter spent over two decades in Paris, eventually directing Atelier 17, where he developed and invented the process that he is most well-known for – simultaneous multicolor viscosity printing. The atelier – a thriving hub for stalwarts like Joan Miro, Constantin Brancusi, Pablo Picasso, and Alberto Giacometti, Reddy closely worked with all of them.

Reddy finally moved to New York in 1976 as Director of Graphics & Printmaking in NYU and later the printmaking department at Cooper Union. Reddy continued to live, work and teach in New York since until his passing in 2018. His work is in the collection of Met Museum NY, Tate Britain, London, National Gallery of Modern Art, New Delhi & Kiran Nadar Museum, India among others.

Reddy’s works in Collection 8 at Thirsty City include an immersive selection of early prints, bronze sculptures, drawings, etching plate and watercolors. Using his plates as a sculptural surface for mark-making and engraving, Reddy’s practice found sanctuary in experimentation with printmaking in a lifelong pursuit to understand form.

Thirsty City celebrates the role of craft and hand processes at the kernel of its creation. From its handmade architectural details that recall the pulsating Art Deco period of the city, to its exquisitely crafted beer and cocktails made on location, Thirsty City rejoices the expressive practice of Krishna Reddy and everything marks a fearless, powerful and young Bombay.